Writer’s Block? Never Heard of It

Last night I dreamed I was at Tintagos again…

I’m moving along through Wild Things, the first book in my new Uncanny series, also writing scenes for the other books in the series as they pop into my brain, happy as houses, when all of a sudden it happens.

A three-book urban fantasy spin-off to the Wyrd and Fae series arises, almost fully formed, in my mind, seizes my fancy and will not let go. It’s a terrible story too, cruel and scary and full of action, lust, betrayal, revenge, and of course love. Aubrey, Lexi, Idris, Jenna, the French girls are all screaming for bigger, better parts.

I suppose I’ll have to write it. I think I’ll be able to. Sales for my other pen name have been pretty good – enough to buy me some writing time – and now that I’m being more proactive with my mailing list, people are becoming more aware of the Wyrd and Fae series ~ as in, buying or borrowing and reading the books. I’ve also had requests for more in the Kiss Me Hello world. I’ve pretty much retired from my day job, so I expect my productivity to pick up.

At this point, the next release is the first in the new series. A nice sneak peek will be available soon. 🙂

Peeking Out From My Cave

It’s been a while…

I can’t believe I haven’t published an L.K. Rigel title since Goblin Ball – that was January 2015, sheesh!

I have to admit I was a bit crushed by the rousing lack of interest in the book. I have always been a terrible marketer. I began to wonder if I was also a terrible writer. So I went off to play in the more author-friendly fields of JAFF.

For those who don’t know what that is, JAFF stands for Jane Austen Fan Fiction. There is a world of people who adore Pride and Prejudice and want spinoffs featuring their favorite couple. I love 19th century novels – even studied them in grad school. I had thought I’d come up with the idea of rewriting one myself with My Mr. Rochester ha!

So that’s where I’ve been, playing in the JAFF pool under the pen name Kate Bedlow. It’s actually been a lot of fun. I’ve written some stories I love a lot, especially Mrs. Hurst and the Huntsman and my latest, Darcy and Elizabeth: Fair Trade. Poor Mrs. Hurst has only two reviews, one of them a 1-star because it isn’t about Darcy and Elizabeth (and it’s also got steamy bdsm-lite sex in it, which the JAFF readers don’t tend to like). Fair Trade, on the other hand has had better sales than any other book I have ever written – and it only came out for pre-order on June 30 of this year.

It’s all about the reader expectations. I almost hit them perfectly with Fair Trade, except for the WORST. ENDING. EVER according to one review. You know I have to be contrary somewhere. Fortunately, the other readers either loved the ending or tolerated it.

I should write another Fair Trade.

I haven’t been able to not. I’ve been working on a new paranormal romance series. I’ve taken all I’ve learned in the past few years and mixed it with my particular quirks. In keeping with My Mr. Rochester and my JAFF adventure, the new series was inspired by the classic R.D. Blackmore novel, Lorna Doone. But that has turned out to be a point of departure.

This will be the first series I’ve written that I intend from the beginning to be a series. It’s hard to remember, but Give Me was originally just supposed to be a one-off! I’ve already planned five books in this new series. They will all be full-length novels. The first book will be out in the fall. There are witches and shapeshifters and vampires.

When I get closer to being finished, I’ll reveal the series name, the title of the first book, post a sneak peek at the first chapter – all that fun stuff.

The Wyrd and Fae series has just had a major facelift.

To see the pix a bit larger, click here.

Along with the nifty new covers, I expanded Fever Mist a bit. Amazon isn’t so amenable to pushing out updates as they were once upon a time, so if you bought Fever Mist and would like a free copy of the new edition, leave a message in the comments or message me your email address on Facebook here.

Much Ado About… Darcy? 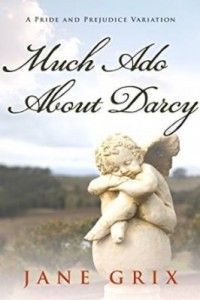 As you may know, I’ve lately fallen into the varied and fascinating world of JAFF – Jane Austen fan fiction. It’s a real thing! And it’s fun. The 1995 Colin Firth production of Pride and Prejudice, most particularly the lake scene, inspired a fervor for Jane Austen’s works – and P&P in particular – so great that her 6 novels have not been enough.

You remember Pride and Prejudice and Zombies? Well, if you don’t, the movie is coming out soon!

Long intro to tell you about a fun one I found while ::ahem:: researching the field. This is a mashup of Pride and Prejudice and Much Ado About Nothing. Very cute and fun, and I loved Mr. Darcy issuing Benedick’s speeches.

Every time I publish a book, a wave of sludge-like bad feeling engulfs me.

Will they hate it? The cover sux, omg. Will anyone even read it? What was I thinking? Who the hell do I think I am?

Usually some nice reviews come in after some time, and I utter a mental “whew!” and relax a little.

Sometimes I get a one-star immediately from someone who hates the book because it’s about what the blurb says it’s about. My eyes cross and my heart cries out to the gods of justice only to be smacked by the gods of what’s what. I (mostly) laugh and start thinking about the next book.

Win an ARC for Not Romantic

This is almost a flash giveaway – it (should) run one day, until midnight Saturday, eastern time. I say should because I haven’t used rafflecopter in a while – I think I did it right!

There will be 5 winners of ARCs for Not Romantic – Charlotte Collins’s story in the Accomplished Ladies collection. 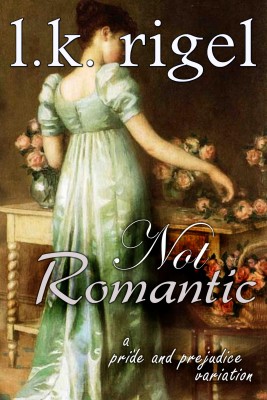 Congratulations to Tracey, Jana, Karen, Jules, and Mary!
And thank you everyone for entering!!

The next story in the Accomplished Ladies collection is available now for preorder.

“I am not romantic; I never was…” That is the attitude Charlotte brings to her marriage with Mr. Collins.

But life is not that easy.

You can read the first chapter here.

With the series now ended, much has already been said about the excellence of FX’s Justified. For my contribution to the conversation, I repost here Elmore Leonard’s ten rules for writing:

My most important rule is one that sums up the 10. The Wager: A Pride and Prejudice Variation

A Pride and Prejudice Variation

The first story, The Wager, is Mary Bennet’s story.

When Charlotte Collins invites Mary Bennet to visit Hunsford, she accepts, determined to quash her tender feelings for Mr. Collins. But she’s is quite unprepared for the handsome and charming Major Carleton “Carley” Quartermaine, visiting Rosings Park with Colonel Fitzwilliam.

Then Mary is scandalized to discover that she is the subject of a bet among gentlemen ~ well, two gentlemen and one lady, mischief maker Caroline Bingley. Prim and proper Mary would never surrender her self-respect, even if Quartermaine’s smile sends a thrill to her very soul…

You can read the first two chapters at Pemberley Possibilities, and you can borrow the entire book free if you have a Scribd subscription.

Isn’t that a great title? I love it! The fifth and final planned book in the Wyrd and Fae (Tethers) series is available for pre-order now! 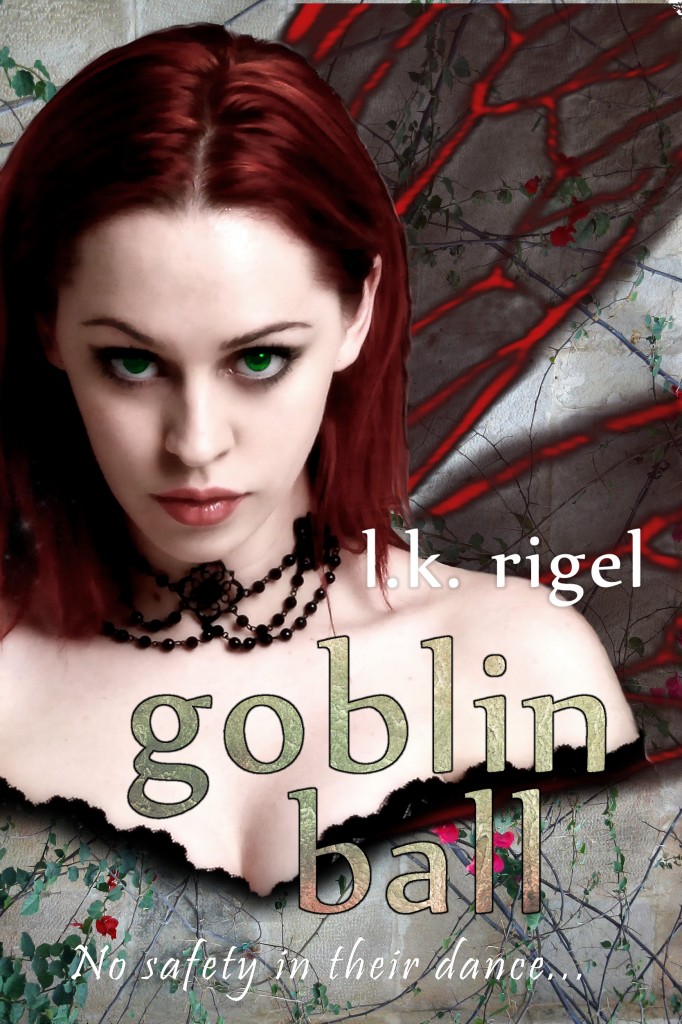 If pricing is my first gadfly in publishing, a book’s cover is my second. In Wyrd and Fae cover news:

I’ve gone back to the original cover for A Glimmering Girl (still 99¢ for a few more days). And here’s the new cover for Bride of Fae: 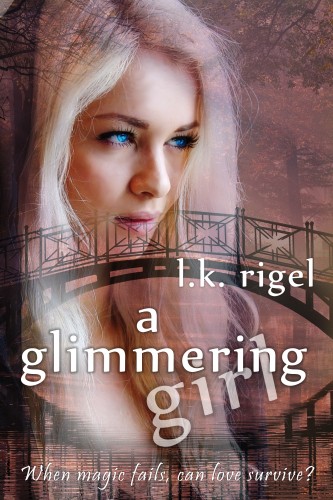 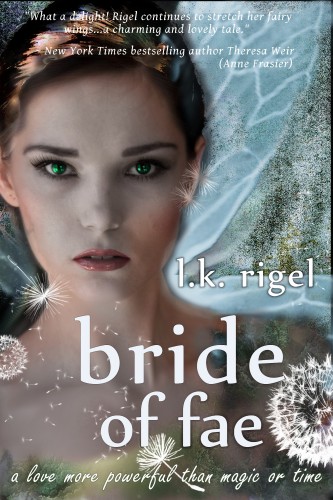