Hi all, it’s the last day to enter the contest, and tomorrow +/- 10 a.m. Pacific time I’ll click the Random Sequence Generator to find the winner. I’ve been doing test runs. It’s fast and simple — in fact, it seems too fast and too simple after this waiting.

As of now, we have 16 entrants and 58 entries. I’ve entered you in the order I received the questionnaires, so LM has slots 1, 2, 3, and 4; BT has 5, 6, 7, and 8 and so on. You’re entered in an Open Office spreedsheet in a vertical column. I’ll run the RSG, and put the resultant sequence in the column next to your names. Whichever name ends up with “1” next to it will be the winner, who will receive their Oberon gift certificate via email right after that.

EDIT and NOTE: I’m going over to a friend’s for hot tub and wine tonight, so if any last-minute entries come in DO NOT FREAK if you don’t get a confirmation of your entry until tomorrow morning, Pacific time!

Just think, this time tomorrow, the winner might have already picked out her/his Oberon treats!

On another note, several people have asked when Bleeder is coming out. I gave a short answer on Space Junque’s thread at Kindleboards, but I’ll tell a little more here.

Bleeder takes place over 100 years after Space Junque when the new world’s geopolitical forms are well-established. I wrote Space Junque as a prequel to show how the world of Bleeder came about.

I always meant Space Junque to be a novella, a quick fun read that established the world of the Afterworld series. Little did I know that Char and Jake — and Durga! — would take on lives of their own. There is more to tell before getting to Bleeder.

So now, I’m writing Spiderwork, the sequel to Space Junque. I’m pretty excited about it — poor Char and Jake! They’ve fallen so deeply in love it hurts, but the political reality of the new world conspires to keep them apart. Meanwhile, Durga has her own troubles.

Durga is the goddess Asherah’s “chosen one” — which means more work and responsibility than anything else. Durga has spent so much time carrying out the will of the goddess and keeping Geraldo away from the other girls that she’s completely oblivious to her own personal needs and desires.

When Khai, the prince of Luxor, arrives in Corcovado for a meeting of the new world’s power brokers, he falls hard for Durga. He can love no other woman — but the very laws he intends to impose will make it impossible for them to be together.

Isn’t this gorgeous?  This painting is called City of Angels by Nathalie Suellen, an artist who also goes by the name of Lady Symphonia. She’s agreed to adapt this picture for Spiderwork’s cover! This is Durga — she’ll have her red hair and spider tattoo on the official cover.

Update: This is the adapted picture. Gorgeous! 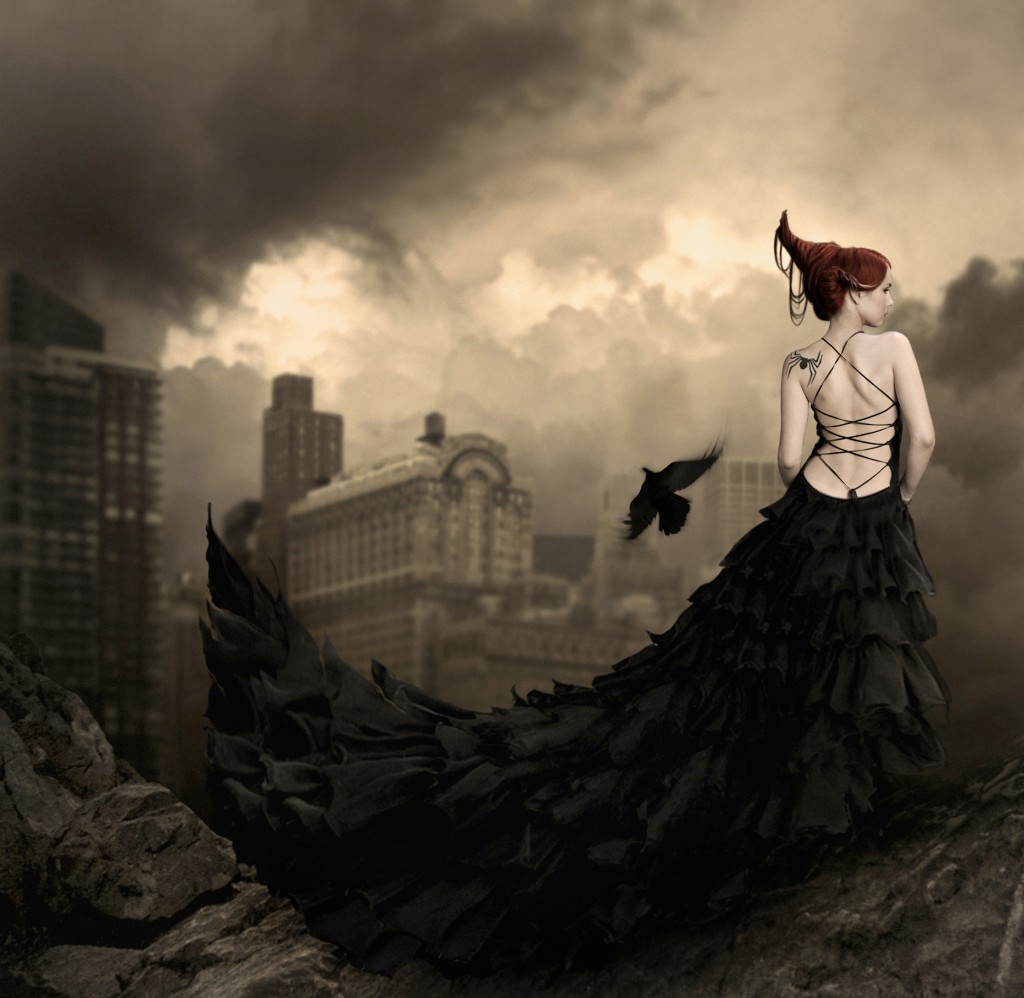 (The dystopic city in the background is Garrick, boo!)