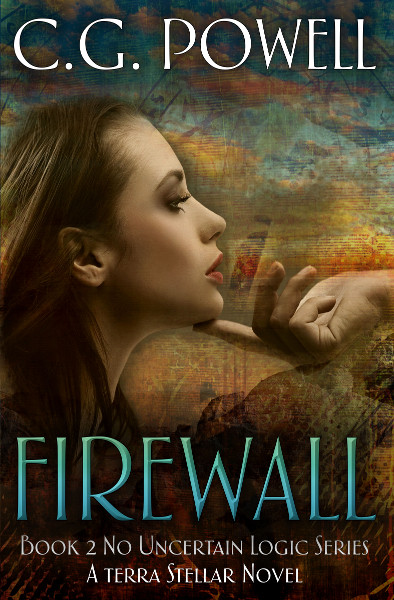 Besides being hilarious and a truly nice person, C. G. Powell is a woman of many talents. She’s a great storyteller, a marvelous visual artist (as you can see by this wonderful cover), and she designs awesome author swag.

Below is an excerpt from Firewall, the next book in the No Uncertain Logic series after Spell Checked, coming this summer.

Excerpt: “I hate to cut things short, but the sooner we get down to business the better.  I’ve made arrangements for a transport to take us to the Atlantis which is sitting in the Meranna Sea.”

Before Sarik could finish, Jael interrupted, “When did you move the ship?”

“Shortly after you left for Ibis Prime.  Orion felt he needed to keep an eye on me once Aphrodite arrived, so he sent a team to assist the move closer to the capital city.”  He looked to Neria and Aphrodite.  “Ladies, if you will follow me.  I will take you to the transport.”

They walked to a smaller docking area where a transporter ship was awaiting them.  Neria’s bags were already on board, as was Captain Ross.

Sarik raised one brow.  “How did you get here so quick?”

Captain Ross cleared his throat and rolled his eyes towards the cockpit where Tal sat.

“It took a while to get used to, but it has its benefits if you can get past the nausea and the whole cellular disintegration reassembly thing.”

Sarik nudged the captain with his elbow.  “Are you sure it has nothing to do with quantum entanglement with a certain Jinn?”

Speechless, Captain Ross’ reddened face spoke volumes.  He excused himself and joined Tal in the cockpit.

Looping her arm in Sarik’s, Jael frowned and continued towards the passenger area of the transport.  “Why do you tease the poor Captain?  I think it quaint that he has taken a liking to Tal even if she doesn’t return his affections.”

“What kind of friend would I be, if I didn’t acknowledge his obvious fondness?”

“Do you really want me entertain your question with an answer?”

Over the intercom the captain’s voice boomed, “Good morning, this is your captain.  Today’s flight should be a clear shot to the Meranna Sea area.  We have favorable atmospheric conditions and low level winds upon approach.  Our estimated arrival is 14:80 standard atomic time, that’s half-past lunch for those of you who still struggle with the local atomic conversion.”

Jael, Salima, and Aphrodite all turned and looked at Sarik.

Pursed lipped, Sarik stood and yelled toward the cockpit.  “Okay, you win.  Now get us the hell out of here.”