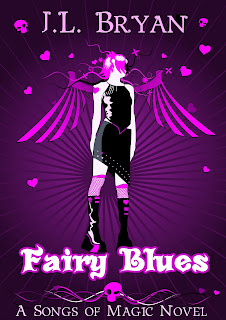 This week JL Bryan, author of Jenny Pox, is releasing Fairy Blues, the second book in his Songs of Magic series.

With their enchanted instruments charming the crowds, the Assorted Zebras attract interest from record producers, and soon they’re off to cut their first album and music video. Jason and his friends don’t know they’ve just become pawns in a sinister plot by a cabal of evil fairies…

Let’s have a giveaway! I’ll give away two copies of Fairy Blues at the end of today (9 p.m. PST).  Enter the rafflecopter widget below, and answer whether you want a Kindle or Nook format if you win.

But wait! There’s more! I’ll give a copy of Fairy Metal Thunder to the first ten commenters who leave the secret phrase in the comments. Winner’s choice, Nook or Kindle.

Secret phrase: Am I blue

Fairy Metal Thunder is the first book in the series:

Jason plays guitar in a teenage garage band called the Assorted Zebras, but they have no fans and no gigs, and they’re going nowhere. Even worse, Jason has a crush on the lead singer, but she already has a near-perfect boyfriend.

One night, Jason steals enchanted instruments from the fairy world. Suddenly (with a little help from YouTube) every kid in the Midwest is crazy about the Assorted Zebras...

REMEMBER THE BOOK GIVEAWAY GOLDEN RULE: Redeem your loot right away! It’s good for the author, and it makes you eligible for the next giveaway.

UPDATE: Congratulations, Rochelle and April!! The Kindle copy of Fairy Blues has been sent, and the Nook will be sent as soon as B&N has it live and available.