The letter from Morning Star Ranch had burned a hole in Charity Steele’s pocket all morning, ever since she plucked it from the unsorted mail. For the second time, her employer, Mae Tagget, absently rearranged a display of ribbons beside the bolts of calico and linen fabric. Charity had swept and dusted and restocked the shelves. Tagget’s hadn’t had a customer in twenty minutes.

“I heard the Lilac is having flan today,” Charity said. Mae loved sweets, and the custardy treat, introduced recently at the hotel café, was one of her favorites.

“Ooh, goody!” Mae untied her apron and smoothed back a fallen lock of her graying hair.

Some might think the dainty gesture out of place in a middle-aged lady who habitually wore her dead husband’s shirts and trousers, cut down to size. Not Charity. She and her sisters had been the beneficiaries of Mae’s cast-off wardrobe, a collection of lovely, utterly feminine things the widow swore she’d never wear again.

Take it all. You’d be doing me a favor, she’d said. The Steeles had lost their clothes—and more—last month when their rafts foundered on the rapids at Break Heart Bend. I’d be glad to have these things put to good use.

Charity’s parents had died in that terrible ordeal, and Mae and the other good people of Break Heart, Colorado, had kindly taken her in, along with her sisters and little brother.

It had been four weeks. Charity felt as though she’d lived here all her life.

She glanced at the large round clock mounted near the register on the wall opposite the bolts of fabric. “Why don’t you go on up to the Lilac for a bite? I can watch the store.”

The bells above the door chimed merrily. As soon as Mae was out of sight, Charity laid Mr. Morgan’s letter out on the counter, along with a blank sheet of paper and her fountain pen. She had half an hour—forty minutes at most—to get the answer written, sealed, and slipped unseen into the outgoing mailbag before Mae returned.

She filled her pen and put the ink on her account. How satisfying it was to earn her own wages! Charity used copious amounts of ink, forever scribbling in her journal or writing to what family the Steeles had left in Minnesota. Each week the cost of items she acquired from Tagget’s were deducted from her pay packet. Paper and ink were always among her largest expenditures.

It was wonderful, having the power to choose for herself. Not to have to ask could she please have more paper, ink, the latest style of pen? Perhaps a volume by Louisa May Alcott or Jules Verne. Not to have to justify why or how much.

With trepidation she opened the letter, the second one the rancher had written, and her heart beat faster as she read each line penned in Mr. Preston Morgan’s strong, masculine hand.

This was the moment of truth.

There was no going back.

It was exactly what she’d wanted.

It was with much joy I received your letter. I am on the trail to Cheyenne, Wyoming, some few days into this spring’s cattle drive, but your letter was sent on from the ranch with the other mail for the crew. We call this the Morning Star’s very own Pony Express.

The distance from my ranch to the railhead is not so far as most outfits face, just under fifty miles, but the days add up, depending on how many and how deep the rivers on the way, and I don’t like to push the herd. The more weight on the hoof at delivery, you see, the better price per head the cattle bring.

I am writing late at night, under what seems a hundred million stars, with a lantern at my side and a lap desk braced against my knees. I may be the “big bug,” as the men call me, but I still take night hawk duty several times on every drive. I enjoy the peaceful quiet. Gazing upon the infinite night, a man can’t help but feel God looking down on us all. This scene always imparts an overwhelming feeling of comfort to my soul.

Earlier a couple of coyotes were singing to each other, and just now an owl screeched overhead, but other than that, it’s been nothing but the silent song of the twinkling stars.

I’m a prideful man and don’t easily set that aside, but I will for you, and gladly. To wit, for your scrutiny: I am thirty-five years old, but I assure you I am vigorous and in excellent health. I’m just over six feet tall.

My dear Miss Steele ~ or may I call you Naomi? ~ if I were there with you, I would take your hands in mine, look you in the eye, and tell you how truly happy you’ve made me by accepting my proposal.

Of course I will come to Break Heart to be married in your church there with all your family and friends in attendance. I owe you that much!

I understand a lady likes to be wooed, and you surely deserve that. I promise to make up what you’ve lost in the way of a courtship by giving you a lifetime of loving care.

Tomorrow the Morning Star’s “Pony Express” will take our letters to post. I hope this one finds you well and in good health.

I will write again as soon as I’ve returned from the drive to let you know when I can come to Break Heart. I look forward to the day we meet. Yours with much gratitude,

Charity blew out the breath she’d been holding. She should be relieved. This was exactly how it was supposed to work.

The man wrote to Mrs. Abigail Vanderhouten, asking for a bride and giving the particulars as to why he was worth the trouble. If Mrs. V approved of what she learned about him from independent sources, he went into her bride book.

The would-be bride browsed the catalog to find a gentleman who seemed pleasing, wrote to him through Abigail, told him about herself, and expressed her willingness to be bound to him by God until death parted them.

The would-be husband wrote back with the funds to cover her travel expenses. When she arrived, they visited the preacher, and that was that. Somewhere in there, Abigail collected a fee from the gentleman.

This negotiation had been a little different. The bride book wasn’t involved, and the maneuvering had taken more than one exchange of letters.

And—one tiny hitch in the git-along—Naomi was unaware of the whole thing.

Oddly, after years putting Mrs. Vanderhouten off, Morgan had written to her the same day he’d departed on his annual cattle drive. The forced delay had allowed for an extra round of letters, and Charity had taken the opportunity to ask him to come to Break Heart for the wedding.

A bold request on her part, but she wanted to see for herself the man she’d secured to be her sister’s husband.

Besides, as the venerable Mr. Darcy had so nonchalantly told Miss Elizabeth Bennet, What is fifty miles of good road? The Morning Star Ranch was fifty miles from Break Heart. If Mr. Morgan wasn’t up to Mr. Darcy’s standard, then he certainly wasn’t good enough for Naomi.

Charity chuckled at the thought and spread her hand over the blank sheet, tested her pen, and began. She was long past thinking about penmanship. Imitating Naomi’s hand was second nature to her now.

I hope this letter finds you (and your cattle ~ and your men!) well and successful in your endeavor and that you all return home safe.

I very much appreciate your willingness to come to Break Heart and be married in the church here. My sister Faith says what our minister lacks in ecclesiastical scholarship he makes up for in enthusiasm. All my sisters and my brother Luke are eager to meet you.

She hadn’t told Mr. Morgan that Luke would be part of the bargain. Hannah—maybe not. There could be a problem convincing the youngest Steele girl to leave her current situation. Naomi had been like a second mother to Hannah and Luke, and Charity couldn’t imagine she’d leave them behind, but there was no point in springing them on the man in letters.

He’d meet them when he came. If he wouldn’t agree to taking a twelve-year-old boy as part of the package—and maybe a fourteen-year-old girl—he didn’t deserve Naomi on that score either.

I must say I’m impressed by your vow to woo me after we are married. From the beginning, you set a high standard for yourself, sir.

I look forward to hearing from you soon.

I remain yours truly,

Wait. The hairs rose on the back of Charity’s neck and a feeling of being watched crept over her. The pen froze in her hand. Was that the echo of the bells jingling at the front door? She feared to look up. She’d been so engrossed in keeping true to Naomi’s voice, when her own would not quite be held at bay.

A judgmental sigh emanated from a living, breathing being not a few feet away. Still, Charity couldn’t bring herself to raise her head.

The sigh was joined by an impatient clearing of the throat, nudging at her from across the counter, then the tapping of a bootheel on the wooden floorboards. Charity forced herself to look up into the horrified face of Mrs. Abigail Vanderhouten.

“What on God’s green earth do you think you’re doing?” 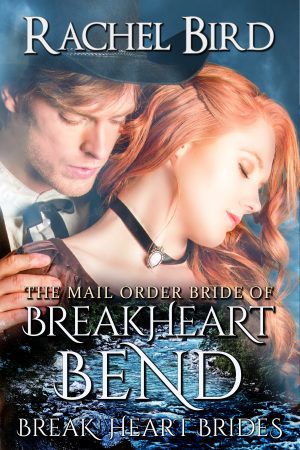