I wrote this guest post for JL Bryan’s Midsummer Dream Fair, inspired by his Songs of Magic Series, but it’s too fun to lose so I’m archiving it here:

1. Where do fairies come from? The oldest and strongest fairies were once fallen angels. These are the lightest fae and the darkest—the most benign, and the most dangerous.

Some fae were once humans who got lost in the fairylands (where time works differently). As magic permeated them to their souls, they turned. They became immortal and beautiful—but they lost their humanity and their capacity for compassion.

A fairy can begin as a faeling—the child of a human-fae coupling. If the child is born in the fairylands, she turns almost immediately. If born in the human world, she may never know about her fairy nature.

2. Fairies hate iron. A fairy feels icky near iron, like he just smelled rotten eggs or walked barefoot on broken glass. A fairy can’t escape an iron cage—it nullifies his magic. Iron gives fairies horrific headaches. Speaking of headaches—and having nothing to do with iron—a fairy can give a human an instant headache.

3. Fairies love all things sparkly. All but the oldest of fae are easily distracted by a shiny object. Fairies like crystal jewelry. Brownies are charmed by Christmas tree tinsel—though they hate when it falls on the floor. Sprites adore starshine. Goblins covet bright-cut silver and gold.

4. Fairies expect good manners, but they loathe being thanked. “Thank you” insults them. As if a mere word is sufficient acknowledgement of their favor! But they do like gifts of appreciation. In an episode of Lost Girl, Kenzie loved it when a brownie made delicious treats for her and Bo and cleaned up their messy house. But when she took him for granted, things went bad. All he wanted was his favorite cereal!

A message from our sponsor (me): Read the first book in the Wyrd and Fae series! 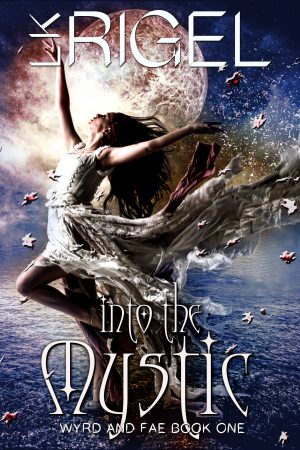 5. It’s dangerous to accept favors from fairies. See #4: Mere gratitude won’t be adequate payment. The fairy will want something in return. It might be your iPad. It might just be the cheap sparkly earrings you’re wearing.

But if you’re in a fairy story you know he’ll more likely want the one thing you don’t want to give—and when it’s most inconvenient to give it. Accepting fairy magic generally does not turn out well. If you think about it, in most fairy tales there’s always a problem with the wish a fairy grants! 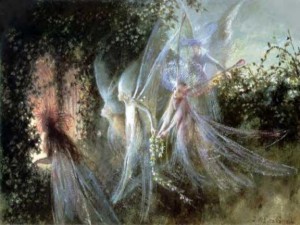 6. Troop Night is the fairy version of New Year’s Eve. On Troop Night (called Halloween or Mischief Night by humans) the fairies gather together then troop out into the human world in a long, long procession. If they’re light fae, they spend the hours from midnight to dawn granting favors and doing good deeds. If they’re dark they cast curses, pull pranks, and create havoc.

7. Fairies don’t like bread or salt. If you want to keep a trinket safe from fairies, pour a circle of salt around it. It’s a good idea to keep a holy cake in your pocket when you go abroad at night, especially on Troop Night. If you see a fairy, throw crumbs or salt at it – and run!

8. In the fairylands, time is different. Never, never, never go into the fairylands without an exit strategy. Time passes so fast there, a hundred years can feel like a day. Be careful! In Into the Mystic, the breaking spell that lets a human escape is to say “I forgive you” three times to the fairy who detained you.

9. Fairies like to steal babies and replace them with changelings. Okay, personally I don’t get this. Babies require a lot of work, and fairies are more interested in play. If they wanted a human to play with, why not take one that’s at least potty trained?

My theory is the babies they try to steal are faelings, and they believe they’re only returning the child to its proper world.

10. Above all things, fairies love music. And they’re good at making it. Fairy music can keep a human dancing until their feet fall off and bloody stumps are all that’s left. In the Songs of Magic series, when Jason steals enchanted instruments from the fairylands, his band becomes a sensation. Of course, there’s a price to be paid…

Have fun at the fair!

Tales of Wyrd and Fae