Why the Jaime/Cersei Sept Scene Was Storytelling Perfection

It seems everyone in the thrall of HBO’s Game of Thrones is having a whacked-out breakdown over “the scene” in the sept between Jaime and Cersei. 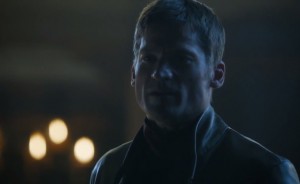 You know the one.

1. Spoiler alert: Read no further if you don’t want to know….

2. Yes-buts and disclaimers: a. This is about the series, not the books. b. Yes, I know rape is wrong.

I completely identified with Jaime’s point of view. After his Big Reveal in the bath with Brienne, Jaime has morphed from Despicable  He  to Tragically Misunderstood Anti-Hero. My altered eye alters all:

Yes, he’s an oath-breaker – but for the noblest of causes. He sacrificed his oath, his very self-definition, to save the world (so to speak) from a monster. And then he was condemned and judged for doing so by none other than the holier-than-thou, beloved-by-all, Stupid Ned Stark.

The world was not grateful for Jaime’s sacrifice. The world went on as it had before, stupid, cowardly, self-absorbed, cruel. Jaime adapted. I don’t know if he was a murderer before then. I know he was afterward. He pushed Bram out the window, intending to kill him. He murdered that guy in the stockade. His contempt for the world is genuine, heart-felt, and the world deserves it.

But I think in his heart of hearts Jaime wishes the world were an honorable and just place, and it tears him apart in his soul that it isn’t.

For years, he’s been estranged from the world. Recently, he’s been captured, ridiculed, lost his right hand (his sword-fighting hand), and finally returned home to Cersei, the one friend, the one love, the one safe place and source of comfort in his life. And she rejects him.

Watch the scene again. I think Jaime cracks when she looks at his stump with revulsion and pulls away from him. It’s too much. The final rejection from the one place he hoped to find acceptance. He breaks, loses control, and demands what he’d hoped she would give freely. Not sex. Comfort, solace, love.

And that’s why the scene is so tragic. Those things can’t be taken; they can only be accepted when offered freely. Poor Jaime Lannister.