One splendid sunshiny day, about an hour after noon, Irene, who was playing on a lawn in the garden, heard the distant blast of a bugle. She jumped up with a cry of joy, for she knew by that particular blast that her father was on his way to see her. This part of the garden lay on the slope of the hill and allowed a full view of the country below. So she shaded her eyes with her hand and looked far away to catch the first glimpse of shining armour. In a few moments a little troop came glittering round the shoulder of a hill. Spears and helmets were sparkling and gleaming, banners were flying, horses prancing, and again came the bugle-blast which was to her like the voice of her father calling across the distance: ‘Irene, I’m coming.’ 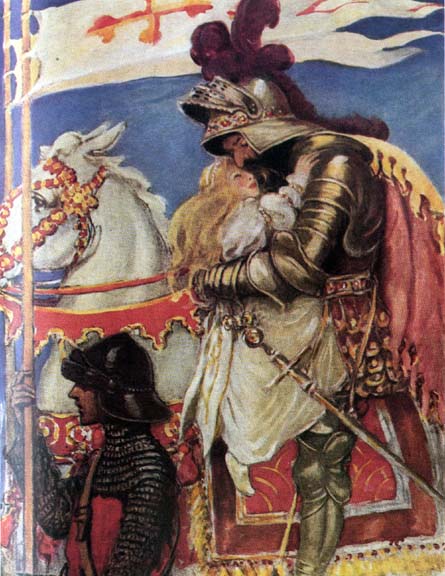 On and on they came until she could clearly distinguish the king. He rode a white horse and was taller than any of the men with him. He wore a narrow circle of gold set with jewels around his helmet, and as he came still nearer Irene could discern the flashing of the stones in the sun. It was a long time since he had been to see her, and her little heart beat faster and faster as the shining troop approached, for she loved her king-papa very dearly and was nowhere so happy as in his arms. When they reached a certain point, after which she could see them no more from the garden, she ran to the gate, and there stood till up they came, clanging and stamping, with one more bright bugle-blast which said: ‘Irene, I am come.’

By this time the people of the house were all gathered at the gate, but Irene stood alone in front of them. When the horsemen pulled up she ran to the side of the white horse and held up her arms. The king stopped and took her hands. In an instant she was on the saddle and clasped in his great strong arms.

I wish I could describe the king so that you could see him in your mind. He had gentle, blue eyes, but a nose that made him look like an eagle. A long dark beard, streaked with silvery lines, flowed from his mouth almost to his waist, and as Irene sat on the saddle and hid her glad face upon his bosom it mingled with the golden hair which her mother had given her, and the two together were like a cloud with streaks of the sun woven through it. After he had held her to his heart for a minute he spoke to his white horse, and the great beautiful creature, which had been prancing so proudly a little while before, walked as gently as a lady—for he knew he had a little lady on his back—through the gate and up to the door of the house. Then the king set her on the ground and, dismounting, took her hand and walked with her into the great hall, which was hardly ever entered except when he came to see his little princess. There he sat down, with two of his counsellors who had accompanied him, to have some refreshment, and Irene sat on his right hand and drank her milk out of a wooden bowl curiously carved.

After the king had eaten and drunk he turned to the princess and said, stroking her hair:

from The Princess and the Goblin by George Macdonald